Taking over a year to complete (time split with other projects), this piece has been the most ambitious artwork I’ve created to date. It’s been my goal to create a piece with the specific aim to push myself beyond any previous personal limitations regarding engineering, finance, complexity, and conceptual meaning.

A project this involved earned a proportionate amount of planning and quiet contemplation before any work could even begin. At this point in my career, I view this particular piece as the combination of my childhood interests mingled with my adult potential. In this article, I’ll discuss how I came to the idea, how it works, and how I relate to it on a very personal level.

What Is It
An interactive 12-sided kinetic light sculpture. If you’re wondering, the official name for the geometric shape is a mouthful: An unequal and twisted truncated hexagonal trapezohedron antiprism.

How It Works
As its name would suggest, this robot is shy. It opens and closes depending on the noise levels in the environment. When the room is too noisy, the two halves close in on themselves and it displays a quick nervous pulsing of multi-colored light. As the room quiets down, the machine opens midway and displays a calmer pulse of green-blue-purple light. When the room as at its quietest, The Shy Machine opens up entirely and displays a slow pulse of undulating rainbow colors.

This piece requires interactions to run. A passive infrared sensor is triggered when motion (more accurately body heat) present in the room. At that moment, the machine takes a quick burst of noise sampling from a microphone amplifier sensor. It measures this sample against a baseline and decides what actions to do next. Depending on the situation, it’ll open or close by running a special type of motor to a predetermined distance. However, without interaction it sits silent, dark, motionless and in the exact position in which it was last left.

Much like it was living, it finds ways to adapt to an ever-changing environment. Occasionally the piece stops all normal functions and enters a ‘learning mode’. During this sensitive time, the two halves close down.  A white light slowly pulses in and out. While still maintaining a shy demeanor, it adjusts the tolerance for reaction. If the machine enters the learning mode in a loud room, a new baseline is set and it reacts accordingly.

A wonderful byproduct happens in this case. At some point, it might actually flip and “feel awkward” if there’s a sudden drop in volume. Just like if you’re at a social event and the house music cuts out, it too reacts in the same way you might. It takes a moment, closes up, and reacts awkwardly until it re-learns a new baseline.

The Shy Machine is slow and patient. This is an intentional choice that passively encourages any viewer to take a moment of total engagement. A sudden clap doesn’t phase the work like a slow increase of volume. Instead it sits back and ponders the long scope. It is a participant; a listener.

The Living Machine Series
The Shy Machine is the third piece in a series I’m calling The Living Machines. The first, The Living Orb, was a tree-dwelling solar charging and night-activated light sculpture that pulsed with a white glow when it sensed night had fallen. After a couple years, it went through a full internal reconstruction complete with new codes and all new electronics hardware. It became The Living Orb V2. In this iteration it moved from the wilderness and into the art gallery. A motion sensor replaced the light sensor and it became outlet-powered. The insides lost their weatherproofing cases and the wiring took on a design slightly akin to a rudimentary vascular system. Once activated by nightfall, it becomes alive by the presence of a passerby. Essentially, it gets excited by the presence of people.

By now, you’ve noticed I speak of it as if it were a living organism. While I fully understand that it’s simply a machine, the primary impetus of this series was born from an attempt to mimic the more subtle nuances inherent in living organisms. Biomimicry is often used in robotics, but mostly in physical format, articulations, and dexterity of motion. You’ll find countless examples of bi-pedal humanoids attempting to master the look and dexterity of the human shape. But, as an artist I’m interested in the more intimate characters of life. This is a pursuit into how intangible aspects (like personality) could be represented through art and technology–without relying on such a 1-to-1 ratio of anthropomorphizing.

The nuances of personality are complicated. Excitement, extraversion, shyness, persistence, openness, etc.–these are the intricate interactions that make up how animals behave, not just how they physically move around. They are descriptors that artists often find themselves investigating. In this series, I plan to continue honing this personification as my understanding of the technology becomes stronger.

A Deeper Look
I have an intense connection with nature. You can often find me in the woods: anything from a 2 acre park down the street to hiking in the cliffs of ancient rainforests. A heavy foot or loud voice will chase any wildlife away. Patience and a quiet sense of respect will allow you to exist amongst the wildlife rather than in place of it.

If you’re lucky, there is a magical moment when you, an absolute outsider and intruder,  become excepted as part of some other ecosystem. In The Shy Machine, the viewer can relive this celebrated moment of quiet acceptance through a parallel in our own social behaviors. As the collective volume averages during the learning phase, a group of viewers are passively urged to unify together to change the course of the machine’s movements in a desired direction. As I mentioned before, it is both a participant and a listener. But it’s also a mirror of the collective personality in the room.

Long before it was a shy machine, it was nothing more than a list of things I thought were cool as a kid. A child of the 1980s, the world had just opened to the possibilities of small technology capable of doing more than simple calculations. Sensors that picked up body heat, multitasking computer brains, environmentally reactive robots, lasers, etc. were the property of science fiction–or at least of a multi-million dollar industry. Let’s be honest–those seem like the same thing to an 8 year old.

Before you could buy hobby electronics online (before ‘online’ was even a thing), I made robots and light projects from salvaged machines my dad had laying around. I could only dream of the future adulthood where I’d make over-the-top, autonomous, and multi-functioning robots. Now that such amazing technology is so accessible, I owed it to my younger self to actually do something cool with it. But before this series, I had no knowledge of programming language at all. The learning curve to get to even this point was quite large. Truthfully, the first two iterations were fairly simple in codes and only dipped a toe in the wold of programming a hackable computer brain. The Shy Machine was a totally different monster all together. And I still have plenty of distance to climb.

Believe it or not, most of the materials are reclaimed. The warm-toned wood that makes up the 12 sides used to be a dark-stained table from the late 1800s!  Wires, switches, clips, and connectors; most all salvaged from other sources. Even the metal hardware that binds the piece together used to be the back plate of an earlier electronic sculpture. Additionally, all but one piece of clear acrylic was purchased from the remnants section of my plastics distributor. Each layer of acrylic is bolted to the wood by brackets salvaged from vintage Samsonite folding chairs. The major electronics however, were purchased from a few choice websites. You can find that information in the link below. Please enjoy the image gallery.

Top view of “The Shy Machine” 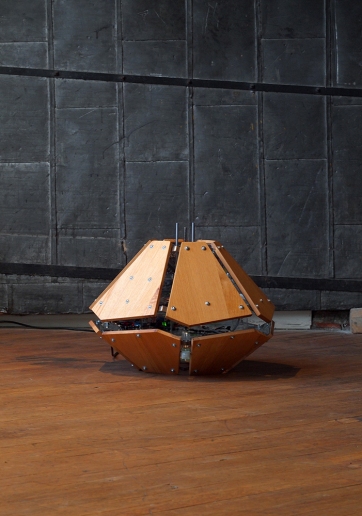 “The Shy Machine” as it waits for movement to trigger it on.

“The Shy Machine” as it opens.

View of the stepper motor, shaft coupler, and lead screw that move the whole top up/down.

This buck converter splits the 12V from the power supply to 5V that charge the LED lights.

An Arduino brain sends a 5V signal to a 2 relay switches to toggle on/off power to the LEDs and stepper motor driver.

A 120v to 10A 5V power supply, toggle switch, & fuse in a custom designed laser-cut enclosure. 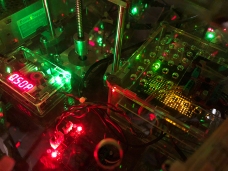 The internal components, while they wait for action. 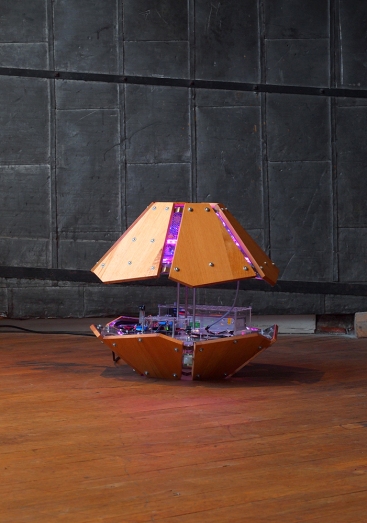 “The Shy Machine” opens fully for quite volume levels.