This past weekend I hung my aeronautical sculpture called “Wings Of Innocence” at the brand new Hilton Downtown Columbus. The opposing wall is a  spectacular 15,000 sq. ft. glass skylight, which I believe makes a perfectly airy atmosphere for the sculpture.

“Wings Of Innocence” is a retrospective response to the inherent imagination of children. Children combine reality and fiction in a way that provides a solution without fear of concept failure. Likewise, the double-wings combine realistic and imaginative flight elements in a suspended sculpture.

The Fun In A Challenge

Situated at the intersection of the Arena District and Short North Arts District, The Hilton Columbus Downtown is home to over 150 pieces of Ohio based fine art. The building is designed around an art-centric experience and I’ve gotten the privilege to hang the work in the large atrium space visible from High Street at the beginning of the Short North District. One of the most interesting and fun challenges of this space was figuring out the mechanics of hanging a sculpture in asymmetrical balance so that it hung along a wall, but not mounted to the wall.

To put this in another way: Imagine a ruler hanging off the end of a table. Now dangle a rock from the tip that is in open air. Can you figure out how you’d hang the whole thing from above the other end of the ruler while keeping it in the same arrangement?

My solution was to build a  truss assembly and counter balanced weights to asymmetrically balance the piece. In this manner, one might even call the wings a mobile sculpture as it is both a fixed and moving sculpture. There was a lot of careful calculations into how one might achieve such a feat.

The whole piece was made mostly from reclaimed materials (which includes wings made from antique closet shelving, drawer slides from a 1960’s secretary’s desk repurposed as angle bracketing, and cast iron roller wheels as counter-balence weights). While the piece is quite large, it only  weighs around 25 lbs. Even less if you simply remove the weights. Believe it or not, both wings together add up to a couple pounds lighter than a gallon of milk.

Where It All Began

Originally, the wings were a response piece I created as part of a  collaborative project between the Ohio Art League and The Franklin County Board of Developmental Disabilities. A select group of artists were paired with students and teachers from the Early Childhood Development branch of the FCBDD and we made a group project with the kids as well as our own piece responding to our experiences with the children. It was a delightful project and I was honored to be a part of it.

The inspirations gained while working with the children reminded me what it was like to be a child. From early on, I’ve been interested in the mechanical natures inherent in transportation design; particularly during the American Industrial Revolution. As part of the research into this piece, I took time to carefully study the early years of aeronautical achievements at the National Museum of the US Air Force. There’s a respectful tip ‘o the hat to the early planes and wind tunnels built by the Wright Brothers in the design of my piece. In the photo album below you’ll find installation photos from 2 exhibitions as well as some process and inspiration shots. Enjoy!

or take the virtual tour of their atrium by clicking here. 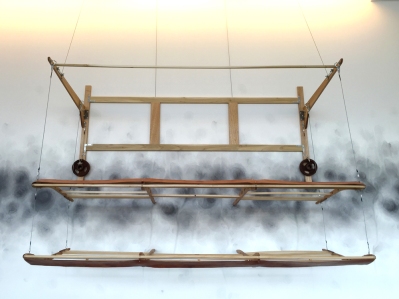 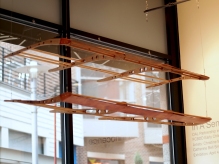 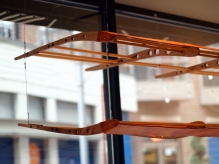 Designing phase for the truss assembly 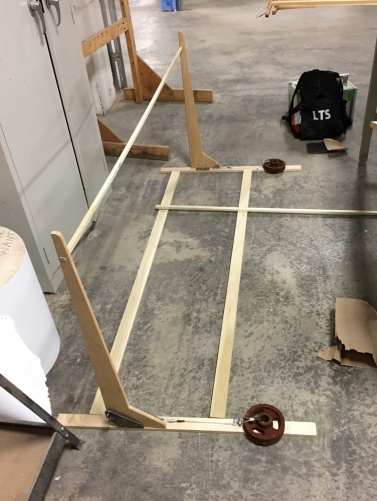 Piecing the truss together

Pattern for the wings 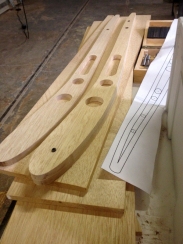 Cutting out the wing sections. 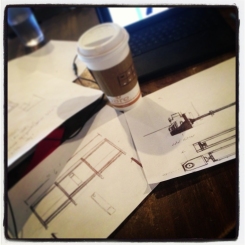 Inspiration directly from the Wright Brothers

Inspiration directly from the Wright Brothers

4 thoughts on “Winged Sculpture Hangs In Skylit Atrium At Hilton”