Interactive Airplane Wing Dreams To Be In Space, Connects to NASA, & Glows At Columbus Museum of Art

{Feature Video of Sculpture Above}

The Imagination Machine is an interactive light sculpture that communicates with NASA, is motion sensitive, tells time, and has a feature that can be remotely controlled from anywhere in the world. It is made from the wing of a Flying Flea aircraft, strips of individually programmable LEDs, and the brains of a Wi-Fi enabled micro-controller circuit board. Part of The Living Machine series, this responsive sculpture takes a look at the emotional intelligence of imagination (as displayed by a robot), and how that relates to a more global sense of self.

This wing has been enhanced with new parts and imagines what it may be like to take flight in outer space. Looking up to the heavens, its onboard brains communicate with NASA’s open database using a unique online key. Each time the International Space Station passes directly over the wing, it gets excited and displays a special light show of vibrant blues. When not activated by the nearby space station, a set of motion sensors wakes it up to perform a slowly undulating pattern of pastel colors for approaching visitors. Additionally, on the hour, the wing pulses white, showing the passing of time.

The Imagination Machine holds another secret as well: One feature can be controlled remotely. From the beginning stages of this piece, I knew that I’d be working abroad during its inaugural debut. It is built to be globally interactive, both from space and from the ground. Just now, I used my phone to say ‘hello’ to the sculpture floating in the museum in Ohio, USA, from where I sit…  a beautiful cafe bistro in Germany.  This remote access has been intentionally designed so that I can share the experience with others I meet abroad. With the tap of a button on my phone, newly made friends can communicate with the sculpture and to the people visiting it at the museum.

The Imagination Machine presents a dual identity, being the dreamer and the dream maker. Its synthetic emotional intelligence and colorful personality reflect our own desires to connect with something larger.

The scale of the wing, its communication with NASA, and its multiple other functions are all designed to promote that tingle that happens when we learn of something new and undiscovered. It reminds us to stop and appreciate that moment on the precipice where things are full of wonder and possibilities.

Color choices are important in any art form. However, it’s exceedingly paramount for light sculptures. The motion-activated light sequence is by far the most viewed program. I wanted to showcase a sensitive, yet colorful range of hues that had real meaning behind them. I created a playlist of color samples taken from ocean and topographical maps, deep space photos, and photos of sunrises taken from natural wonders I’ve encountered. Each time a motion sensor is triggered, it randomly selects a color wheel from the playlist and different speed to modulate the color patterns.

During the hourly sequence, both halves of the wing pulse a white light, washing away the past hour and bringing in the new. Instead of patterns crawling across the length of the strip (like in the motion playlist), the hourly sequence fades up and down in unison with its respective half wing.

The ISS crossing overhead is an ever-changing event that could happen 4-5 times while the museum is open–or not happen at all. This organic interaction is a special moment for those who witness it in real time. It is only appropriate that this light show needed to be equally dynamic and special. When excited by the ISS, a series of highly chromatic blues pulse quickly and crawl along the strip.  Space exploration and scientific research often have direct color relationships with the blue hues of the ocean and sky and I felt it right to follow this tradition.

The ‘Hello’ program engages all of the LED patterns: an off-centered rainbow sequence, the ISS sequence, followed by a hot orange ‘Near Earth’s Orbit Asteroid’ pattern (a future additional NASA-related trigger). Depending on how the trigger is pressed, it may run through these once or play through them twice. This is the feature that I’m sharing with my newfound friends overseas.

Currently, this piece is on display at the Columbus Museum of Art from 6.14.19 – 9.29.19 The annual Greater Columbus exhibition features work by outstanding artists based in Central Ohio and is a partnership between CMA and the Greater Columbus Arts Council. This piece has been made with the help of fellowships and grants through the Greater Columbus Arts Council, the city of Columbus, a partnership with the Columbus Museum of Art, and the generous donation of a plane by Mark Curtner in connection with the Historic Grimes Field Airport in Urbana, Ohio. Ohio’s only airport with 3 Museums on Field: The Champaign Aviation Museum, the Grimes Flying Laboratory, & Museum and the restoration wing of the Mid America Flight Museum of Texas.

A special thanks to:

What it looks like when it’s reacting to the International Space Station overhead.

“The Imagination Machine” during the opening reception 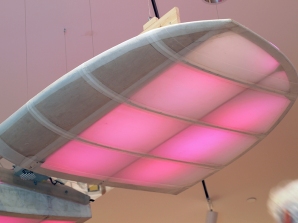 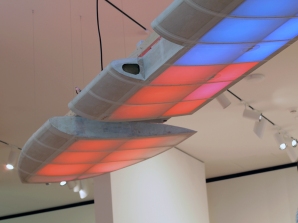 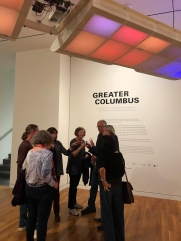 Opening reception at the Columbus Museum of Art 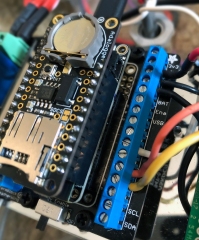 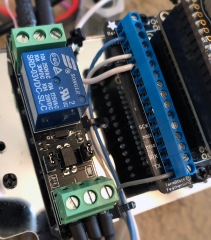 A 3.3 v relay switch controls the power to the LEDs, keeping them separate from the other sensors.

1 of 2 control panels. Each side of the wing gets one of these panels and they work independent of each other. 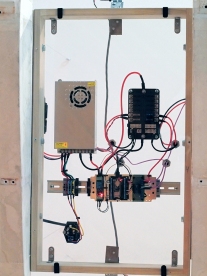 The final wiring set up for each control panel and electronics.

2 thoughts on “Interactive Airplane Wing Dreams To Be In Space, Connects to NASA, & Glows At Columbus Museum of Art”